For the December holiday I though I’d make a modernist turducken using what I learned from my turken experiment.  This time I made sure to get the slurry ratio of transglutaminase to water right.

Bought the same chicken and turkey breast that had worked so well last time and got some duck breast from Sheridan Fruit Company with a nice skin on it.

After making sure all the meat was clean I decided I was going to do the turkey on top, duck in the middle and chicken at the bottom.  I’d also put the duck skin on the turkey.  This would make it so I could finish the dish by browning the turducken on a hot pan with the duck skin side down.  The turkey, being the largest breast could help absorb the heat and make sure the duck always remained protected.   I could also flit it for a little bit and brown the chicken without fear.

From the internet I had found out that transglutaminase works better if the meat is salted.  This brings out more of the surface proteins that then can be used to bind the meat together.

Everything started find but as we applied more and more of the slurry it stated solidifying.  I’m still not sure why but I’m going to blame it on the salt contaminating the slurry.

Wrapped the whole goopy mess tightly in plastic wrap, put it in the bottom shelf of the refrigerator.  Also added a plate and put a couple of cans over it to add some weight.

The next day I checked and the first turducken breast looked great but the second one never really stuck together.

I put it in a zip-top bag with 2 table spoons of bacon fat rendered from Benton’s bacon and a table spoon of duck fat.  It was cooked for 2 hours in a water bath at 62˚C.  This is lower than the turken but it’s because I’m trying to not overcook the duck. 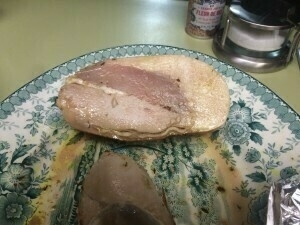 Once it was done, I seared it in a hot pan with more rendered bacon fat turkey side down.  The issue here was that by using plastic wrap, the new meat looked more like a tube than a box, so getting a good sear on the whole duck skin was impossible.

The turducken did turn out quite good.  There were no complaints from the table and even some praise that it didn’t need the gravy we had made as it was juicy and tender.