Like last year, we gathered as much of the figs and italian prunes as we could from the trees and made some wine out of it.  The only difference is, this year we stole an idea we got from FH Steinhart’s wine class.  We used what was left after pressing the Cab and added the solids to this wine.  From what we were told this should bring in some of the flavor and tannins.  It definitely brought over yeast and malolactic bacteria.  The thing started fermenting in minutes, even after the sulfites were added. 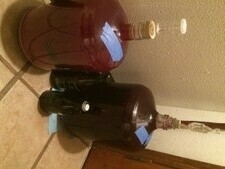 Racked of the lees 10/24/2015  and added 0.5 gallon of the Cabernet Sauvignon (plus some of the less from the bottom of the Cab Sauv) and added 0.6 oz of medium toast french oak cubes.  Left for ~2 weeks for malolactic fermentation.

Racked off on 11/17/2015 and added .5 tsp of potassium metabisulfite and now it’ll sit and rest until next year.