Went to a wine class at FH Steinbarts and a couple of hours later I had signed up to get 100lb of Washington Cabernet Sauvignon.  Here’s to the first wine from grape I’ve made.

Pressed before fermentation was over : 09/26/2015 and let keep fermenting in the basement (average temp ~63F) for about a month.

Racked off lees 10/24/2015, added 2.5 oz of medium toast french oak cubes, and set for malolactic fermentation starting at 21.1C and ramping up to 24.1C in 4 days.  Then let rest at 24.1C for 2 weeks.  Interesting enough fermentation stared up again.  I’m not sure if it’s malo or regular sugar fermentation but there’s definitely a lot of bubbles going up the sides of the carboy. 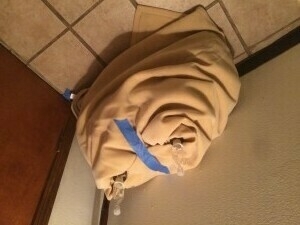 Maybe next year it’ll be a good idea to let fermentation happen for 2 weeks on the fruit, press when it’s between 10-20 Brix and then increase the fermentation temperature to 24.1F after that to let it finish.

11/17/2015 racked off to final carboy and added .5 tsp of potassium metabisulfite and now it will rest until the fall.  The half-teaspoon is kind of a hack job as the scale I have only has gram resolution. I need something that has tenth-of-a-gram or better.